Norbert Werner, the holder of the MUNI Award in Science and Humanities at Masaryk University, is the scientific coordinator of the mission, which began this morning with the launch of the Soyuz rocket.

A system of small detection devices of the size and shape of a box for a bottle of wine orbiting the Earth. This is the latest proposal of scientists dealing with the detection and monitoring of gamma-ray bursts, a fundamental phenomenon from the point of view of astrophysics. Gamma-ray bursts only last for fractions to several tens of seconds and, so far, have only been detected under exceptional circumstances. The flagship of this ‘fleet’, a nanosatellite called GRBAlpha, will be launched into space on Saturday, March 20 (note: it was finally launched on Monday, March 23), as secondary cargo on a Soyuz rocket taking off from the Kazakh Baikonur spaceport.

“The aim of this mission is to verify operation of the proposed detector in orbit”, said the scientific coordinator of this international mission, the Slovak astrophysicist Norbert Werner who is based at the Faculty of Science of Masaryk University. “If it turns out that the proposed device, which has already undergone a number of tests on Earth, actually works in orbit, we would like to gradually send a whole fleet of these small detectors into space, allowing measurements covering the entire sky. By linking the data received from these devices, we should be able to locate where gamma-ray bursts come from and then make further measurements and observations”, added Werner. 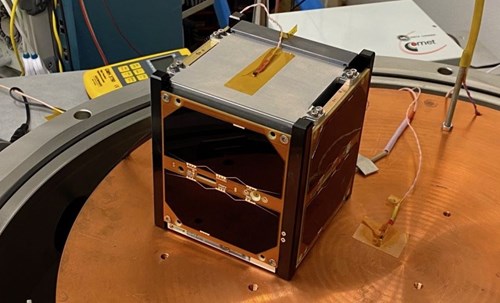 Gamma-ray bursts, which occur during neutron star collisions or the gravitational collapse of very massive, rapidly rotating stars, provide astrophysicists with an opportunity to elucidate and demonstrate a number of physical phenomena. “Thanks to a unique observation in 2017, when gravitational waves and a gamma-ray burst from a neutron star collision could be detected and located at the same time, it was possible to quickly aim terrestrial telescopes at the source. Based on these observations, it was found that neutron star collisions produce elements heavier than iron, such as gold or platinum”, recalled Werner, when explaining the importance of monitoring gamma-ray bursts.

Since then, however, similar observations have not been possible. At present, there is no device capable of monitoring the entire sky and, at the same time, able to locate the source of the flash. The idea to monitor gamma-ray bursts using small nanosatellites first arose following the crash of the Japanese X-ray astronomical satellite ‘Hitomi’, the preparation of which Werner collaborated on for several years. The Hitomi spacecraft only lasted 40 days in orbit before completely disintegrating due to rotation, having cost many scientists a huge amount of efforts and energy.

“I was really sad about it and during one discussion with András Pál from the Hungarian Astronomical Institute, we focused on so-called nanosatellites, which are less demanding to construct and can be built much cheaper. We were looking for a way to use them and then we thought that these mini-satellites could be used to monitor gamma-ray bursts, which are very short but very strong, so we set off”, recalled Werner on how collaboration on the development of the GRB (Gamma-Ray Burst) detector (GRBAlpha) began at the Hungarian Astronomical Institute.

The Slovak-Czech company Spacemanic, operating in Brno, and the Slovak company Needronix, whose designers already had previous experience with construction of a nanosatellite known as skCube, took part in the development of the mini-satellite. The Faculty of Aviation of the Technical University in Košice, which is the official operator of the mission, also played an important role. As an academic institution, it was able to enter a project via an international competition organised by GK Launch Services. The project succeeded and received a 75% discount on the price of the flight, which is around one fifteen thousand US dollars (EUR 12,300).

Working alongside Norbert Werner and András Pál are a team of around 10 scientists and designers from Hungary, Slovakia and the Czech Republic who, working closely with their Japanese colleagues, have already developed a similar detector for the Czech satellite VZLUSAT-2, which is scheduled for launch in June. In the future, the scientists would ideally like to have ten such detectors in orbit, capable of carrying out monitoring for at least one year.